From Cell Phones to Shoes:How to Use Your Business To Help Haiti Victims

Every where around there are businesses and organizations pitching in with disaster relief efforts for Haiti. While booking a flight to Europe, I received a message from United Airlines about their matching donations up to a total of $50,00o to relief organizations. In thanks they are offering a one-time bonus of 500 miles to Mileage Plus members,who donate $50.00 or more.

T-Mobile is helping family and friends of Haiti's victims, by doing what they do best, providing cell phone service. Blair Kroeber, a contributor to this blog writes:

In the aftermath of the tragic earthquake in Haiti, T-Mobile has stepped in to spearhead an array of practical and timely relief efforts. As announced on its online forums last week, the upstart cell carrier has donated wireless equipment, such as power generators and cell towers, for rebuilding the wireless infrastructure of their sister networks on the island, Voila and Digicel. More impressively, though, in the immediate fallout of the quake, T-Mobile announced they would temporarily waive international long-distance charges for all customers calling into and out of the devastated island-nation, allowing Haitians in America and elsewhere.

T-Mobile also plans to waive roaming charges within Haiti for earthquake victims and relief workers traveling the country. Both perks apply retroactively, beginning January 12, the day of the earthquake, and extending through the end of this month. Says Robert Dottson, T-Mobile USA President and CEO, "Our company and our employees care deeply for our customers, and we know that many customers have been directly impacted by the disaster in Haiti." In light of this unspeakable emergency, T-Mobile is offering a basic and essential service as only they can: helping victims, friends and families around the world make a connection.

Small businesses are helping too.
Smaller businesses may feel that their contributions to these efforts are a mere pittance. But taking the example from larger businesses, they too can leverage their assets and help support the victims of this disaster. Just as an example there are small businesses in my area are d 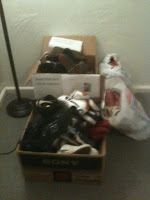 oing just that: a health spa is offering a Pilates mat class for Haiti where all proceeds will be donated towards Haiti; a young local singer was selling her CD's at her coffee house performance this weekend, with portions of proceeds going towards a relief organization; a doctor in a medical a practice got everyone in the office and patients involved in a shoe collection for Sole4Soles, an organization that collects and delivers new and used shoes to the children and adults in Haiti; and a local shoe store is a drop off center for shoes that also go to Soles4Shoes. Small businesses all over the world are trying every way they can contribute.
Check out the heart warming story:"Giving Heart and Soles for Haitian Children" on the CBS Evening News with Katie Couric.

Businesses all over this country and around the world have responded with the desire to help: